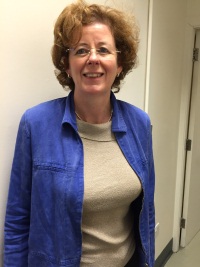 Dr. Frances Enright is a general paediatrician.  She came to Cork in 2010 to work at MUH as a consultant paediatrician in general paediatrics; and works with her consultant and nursing colleagues and non-consultant hospital doctors (NCHDs) in delivering the service in the paediatric ward and outpatients department.  Half of her time is dedicated to community child health for those children <16 years attending the Health Service Executive (HSE) disability services in North Lee and North Cork.

Dr. Enright qualified in 1992 from University College Dublin (UCD) after secondary schooling in Tralee.  She interned at St. Vincent's Hospital in Dublin and then worked in general paediatrics and neonates for 5 years in Our Lady's Children's Hospital, Crumlin and the National Maternity Hospital, Holles Street.  After her MRCP (Membership of the Royal College of Physicians) exams in 1996 she started to subspecialise in paediatric neurodisability and worked as a paediatric consultant in the Children's Sunshine Home (now Lauralynn Foundation), Enable (Tallaght and Naas) and AMNCH (Adelaide and Meath Hospital, Dublin -- incorporating the National Children's Hospital).  As a registrar in neonates in Holles Street she was on the rota for national neonatal transport in 2004.

In 2004 she studied Neurodisability under Dr. Sheila Macken's mentorship and in 2006 she was awarded a post-graduate diploma in Neurodisability from Sheffield Hallam University.

Dr. Enright worked as a general paediatrician in Wexford General Hospital with 50 percent special interest in community child health from 2005 to 2010.  In Wexford she took the clinical lead in 2008 for the neonatal guidelines in the special baby care unit.  While there she became a Fellow of the faculty of paediatrics, Royal College of Physicians of Ireland  (FRCPI), instructed neonatal resuscitation and facilitated UCD medical students.  She also attended the Waterford Community Child Centre in 2010 and, under the supervision of Dr. Elizabeth Walsh, acquired the skills of colposcopy in children who allege sexual abuse.  In 2012 she undertook a SAFE (sexual assault forensic examination) course at UCD.  In 2013, she was awarded the post graduate certificate in SAFE.  Dr. Enright administers SAFE medical assessment at the family centre in St. Finbarr's Hospital at the request of social workers and Gardai.

In 2011, Dr. Enright undertook training in Botox administration for children with cerebral palsy. She works weekly at Enable Ireland's Lavanagh Centre where she sees the children who need botox to muscles.  This procedure is done under ultrasound guidance and under sedation or general anaesthesia in MUH to relieve muscle spasticity.  Ms. Eimear Daly (nurse), Ms. Doireann Lynch (physiotherapist) and anaesthetists support her with this work.

She has outreach clinics from Mercy University Hospital for medically complex children with intellectual disability from North Lee attending Cope Foundation and from North Cork attending St. Joseph's Foundation.  She is supported by community nurses at these centres and Mercy University Hospital paediatric specialist nurse for intellectual disability.

Dr. Enright supports the area medical officers in Cork with developmental assessments and triage to her paediatric outpatient clinic in MUH and attends the monthly early intervention forums at North Cork and North Lee.

She is on the pan-city consultant paediatric rota and covers both MUH and Cork University Hospital (CUH) paediatric services while on-call.  She is also an occasional lecturer and examiner of UCC medical students.  Dr. Enright attends peer review at RCPI faculty of paediatric community paediatric meetings in Dublin; and instructs on the recognition and response to child abuse courses at RCPI (Royal College of Physicians of Ireland).

Dr. Enright has many publications and continues to encourage NCHDs to learn and publish.  She also supervises final medical student research projects.